Poland is famous for some of the most unique, and interesting caves in Europe. Labyrinths of caves, underground rivers, large caverns with prehistoric reminiscence.... this are the unique characteristics of underground world, that you can discover in Poland. 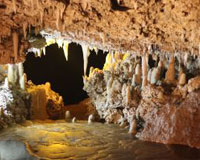 Cited as one of the most beautiful caves in Poland despite its small size. The limestone cave is located in the hill Malik, Swietokrzyskie Voivodship. In order to reach the cave, you must go to the Switokryzskie Region. After taking exit road E-7 between Krakow and Kielce, a road leads right to the cave’s entrance. The cave is 180m long.

The most famous cave in Poland that is located in the Wawell Hill in Krakow. The cave has a length of 276m. The cave is open from April 1st until October 31 from 10 a.m. to 5 p.m. The temperature of the cave is around 7-8 Celsius. A passage within the cave leads under the St.Stanislua and St.Wenceslaus Cathedral. The underground pools contain a rare crustacean called the Niphargus tatrensis.

This cave can be found in Narodowym Park in Dolinie Pradnika. The cave has a length of 270m. The temperature of the cave is around 7-8 Celsius. The cave has two big chambers, Knight's Chamber and Bedchamber, which are connected by narrow cross rifts.

The largest cave in Krakow that is 25km away from the center of Krakow. The cave is 350m long. It is a famous archaeological site whose finds include cave men, hyena, bear, lion,  reindeer and Neolitic settlements. The cave is also situated in the valleys of Krakow.

The cave is 600m long and is considered the longest cave of Sudety. It is famous for its finds of cave bears, lions, hyena, deer and other animals. The contains three levels, with the middle one being the show cave. The temperature in the cave is 6 degrees celcius.